Back to News Overview
28th April

Electric fleets: Is it time to make the ‘switch’?

There’s been increasing pressure put on fleet operators to reduce their carbon emissions in recent years, spawned from EU legislation that sets binding emission targets for new car and van fleets – and the EU is also working on a strategy to reduce CO2 emissions from heavy-duty vehicles. Fleet operators are caught between a rock and a hard place as a result. On the one hand, there’s local awareness and opinion and EU legislation to think about, while on the other there’s operating costs to think about. And these aren’t easy things to juggle.

This affects both private and public sector fleet operators. From the biggest to the smallest, no fleet is immune. Thankfully, such carbon emissions targets have been created based on the increasing availability and operating feasibility of certain technologies, chief of which is alternative fuel – especially electricity. But is electricity the right solution for your fleet?

Is it time you switched to an electric fleet?

While electric vehicles are certainly an intriguing prospect for fleet operators, most manufacturers of EVs would admit that they are not for everyone and that they only really work for drivers who will cover a low annual mileage; which isn’t a great start. But, more and more fleet operators are turning to electric vehicles to meet emissions targets, improve their overall environmental credentials and lower their tax bills – despite range anxiety.

A case in point is West Midlands Police, who took on two Nissan Leafs to improve their environmental credentials and test out what an EV is really like to use on a daily basis. And, the NHS has put forward a £5m scheme to increase public sector use of plug-in cars. 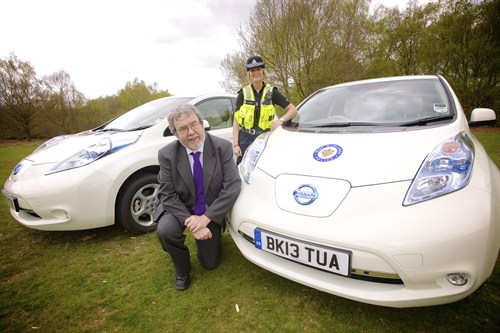 Weighing up the advantages and disadvantages of electric vehicles

When it comes to making an informed, rational decision about whether it is time to make the switch to an electric fleet, there’s only really one way to go about it – by listing the pros and cons of electric vehicles. Your fleet will have its own system with its own needs, but these advantages and disadvantages are fairly universal and should definitely be considered:

The advantages of EVs over petrol and diesel-powered vehicles are largely confined to operating costs and emissions, while the disadvantages of EVs are largely confined to issues regarding the technology itself. The biggest concern with regard to EVs for fleet operators is undoubtedly range – how far a vehicle can travel on a single charge. This is confounded by the fact that electric vehicles can take hours or even tens of hours to charge without access to a super-fast charging station; these are extremely rare outside large towns and cities.

Electric vehicles – investment and the future

It’s still early days for electric vehicles, and there’s uncertainty in the market over longevity and re-sale values, however in the past five years there’s been significant improvements in the battery packs used in vehicles and the availability of charging stations. All of which has put electricity in pole position as the number #1 choice of alternative fuel in the future.

And the UK government is impressed, too. They have committed at least 200m in the period 2015-2020 to bridge the cost of ultra-low emission vehicles, including EVs.

Of course, EV uptake will result in an increase in electricity usage – but there’s plans to counteract this. The Houses of Parliament published an interesting POSTnote in 2010 which disclosed the government’s stance on electricity as an alternative fuel. In it, it’s stated that “The government’s Low Carbon Transition Plan 2009 outlines plans for 40% of electricity to come from low-carbon sources by 2020”. All of which means that the government is making significant changes to the way we generate our electricity, which’ll greatly benefit EV usage.

It isn’t time to make the ‘switch’ just yet. But it is time to get a taste of the future.

The future of low emission fleets is electricity. But the technology and infrastructure is not yet at a stage where it can totally replace traditional fuels. As a result, it’s best for fleet operators to take a step back from the idea of ‘switching’ and instead embrace the time we are in to test out and perhaps lease an electric vehicle or two to get a taste of the future.